Mar 24, 2020
Looking to get free music apps for iPhone? Well, you are in the right place. Gone are the days when downloading songs illegally was cool and the only way. Thanks to the ever-growing streaming services, we can listen to songs without breaking a law or two. iPhones have been around for over 13 years and people always wondered how to get free music apps for iPhone. 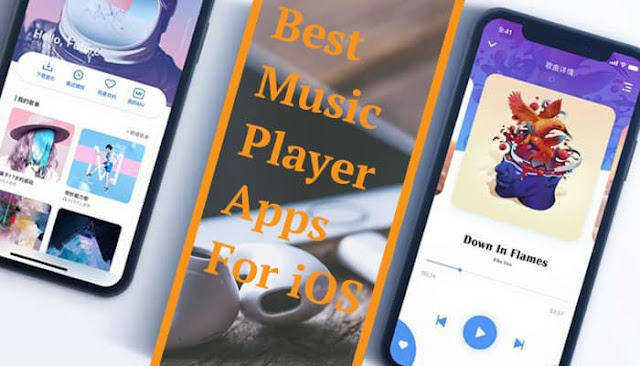 As you might know, jailbreaking is an option but many won’t do it just to listen to a few songs. Nowadays, fierce streaming wars have forced firms to reduce subscription costs. But if you really don’t want to pay a penny to listen to songs, you can opt for the free version of the streaming services. Yes, you’ll have to put up with those pesky advertisements but as long as you have an active internet connection, you can listen to songs for free. Before we begin, here’s a question for you – What kind of music are balloons afraid of? Simple, Pop Music.
Also read
Toloud

It shouldn’t be a shocker to see Apple Music top our list of the free music apps for iPhone. It does come preinstalled on every iPhone. You can think of it as the entire iTunes collection on your fingertips. It includes a catalog of over 60 million songs, which is huge! Other than songs, users can choose to listen to Radio services, a unique music service that builds playlists based on what the user usually prefers. It’s a great app for music enthusiasts and lazy folks as there’s no need to download a separate app. If you don’t have it already, download it from the link below. 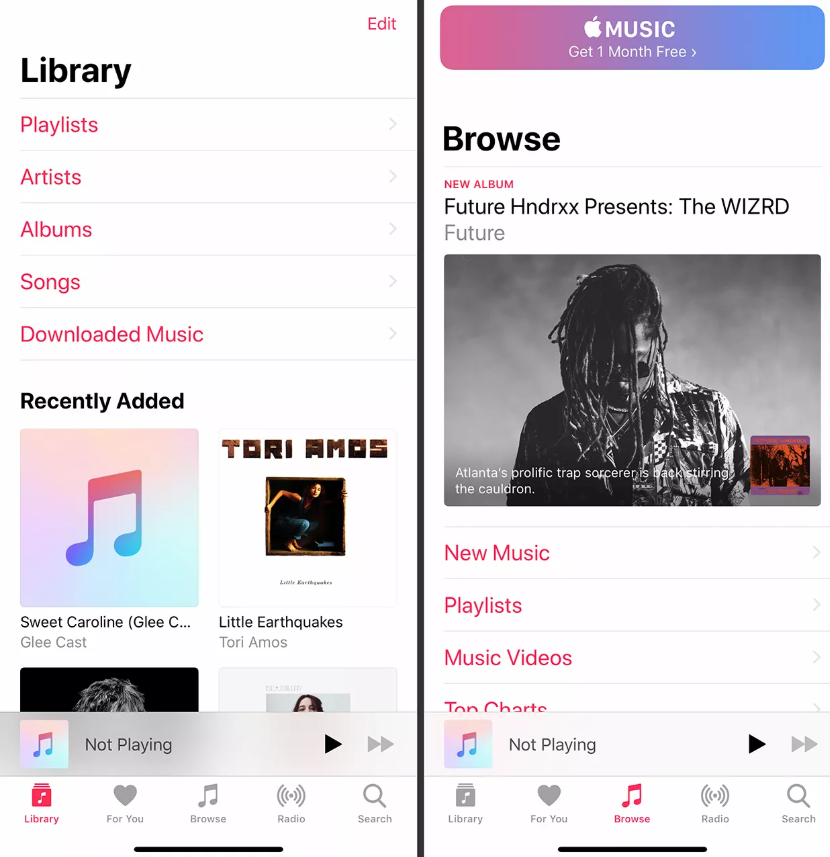 Spotify is my go-to entertainment option. I’m in daft with its user interface, a dark but appealing structure that has everything in the right place. With over 50 million songs to choose from, you’ll likely be engulfed in it for months. Along with a myriad of built-in and tailor-made playlists, Spotify has recently added Podcasts to its massive audio collection. The free version comes with limited skips and of course, you can’t download songs for offline entertainment. Download Spotify from the link below. 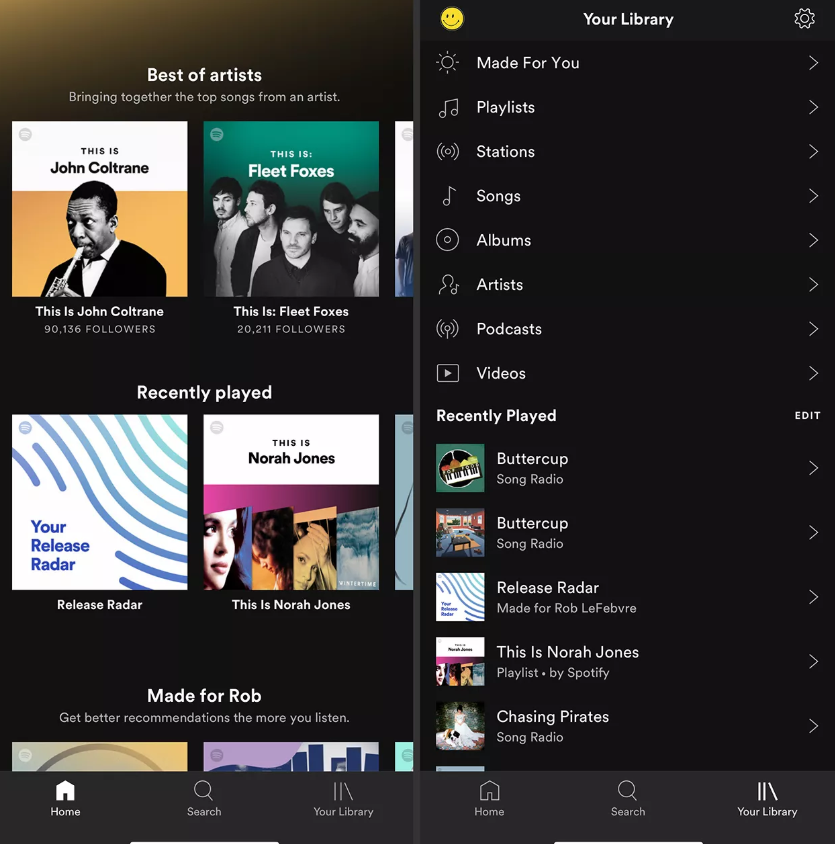 Google Play Music is the third app on our list of free music apps for iPhone. It is an intuitive music-streaming app that focuses on features like hosting one’s own music in the cloud, streaming new music on the app, and accessing internet radio. You can upload own the music that you own on to your Google account so that you can listen to it offline. This way, you won’t require an active internet connection. The other feature includes radio-style playlists that work according to genre, mood, activity, and more. Overall, Google Play Music is a great offering. Download it from the link below. 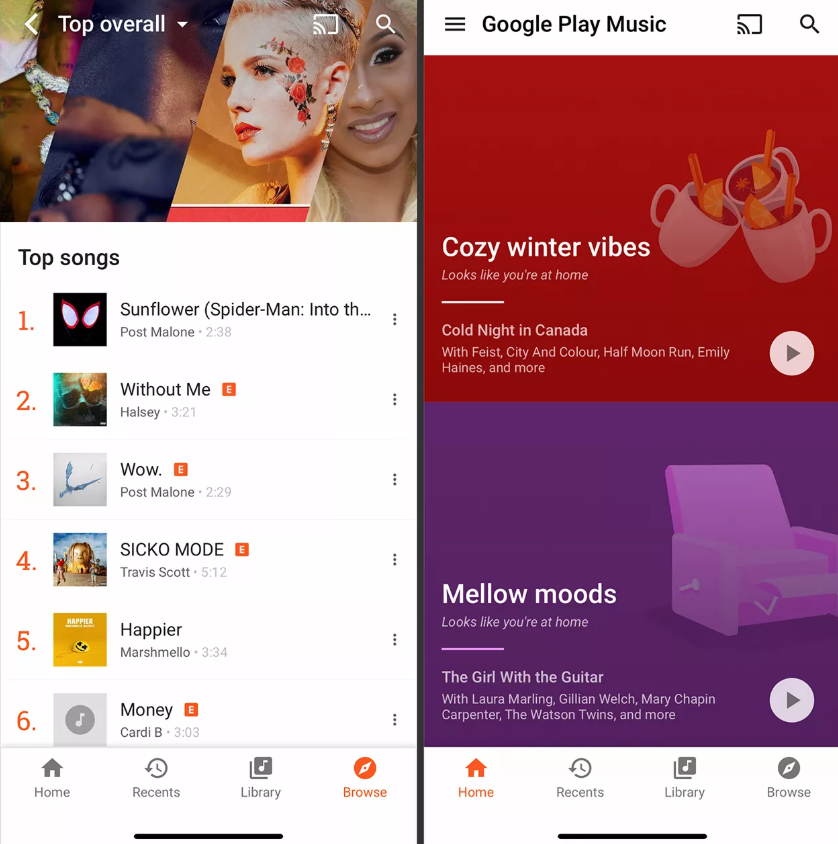 Earlier known as Saavn, JioSaavn is a handful music-streaming app that offers over 55 million songs. This kind of catalog is on par with the highest of its competitors. The user interface is another wonder that many underestimate. It’s quite light and clean. The home screen welcomes you with songs that are trending under ‘Weekly Top 15’, while ‘Trending Today’ gives you quick access to the songs that are trending. Not just groovy Hindi songs, you can listen to regional songs as well as the best of what Hollywood has to offer. JioSaavn podcasts deserve a special mention. Podcasts like Mind Voice, NoFilterNeha, Bhai ke Raapchik Reviews are worth your attention. Download the app from the link given below. 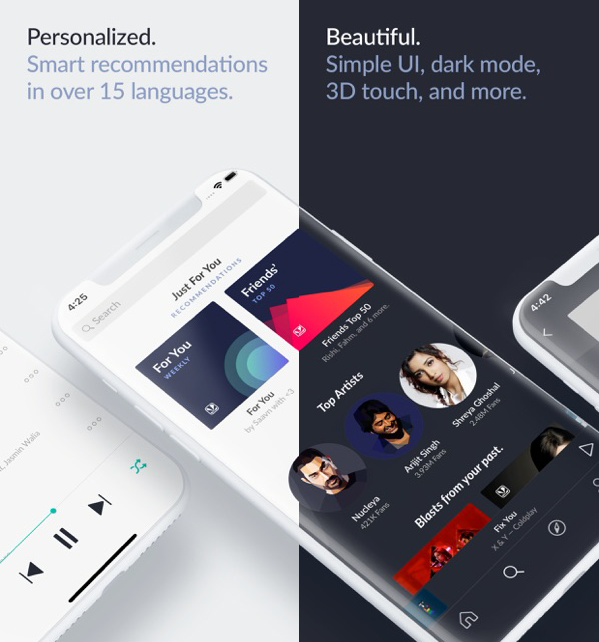 The next app on our list of the free music apps for iPhone is Amazon Music. In order to use it, you must have the Amazon Prime subscription. While it offers one-day delivery and access to a wide range of video library, its music offering is catching up. Amazon Music offers over 55 million songs that include hip-hop to romantic playlists. The UI isn’t anything to write home about; basic could be a word to surmise it, The music collection is impressive but the local archive is rather underwhelming. The audio quality maxes out at 256kbps (mp3), unlike its competitors which offer up to 320kbps. So, tap the download link below and be at the prime of your life. 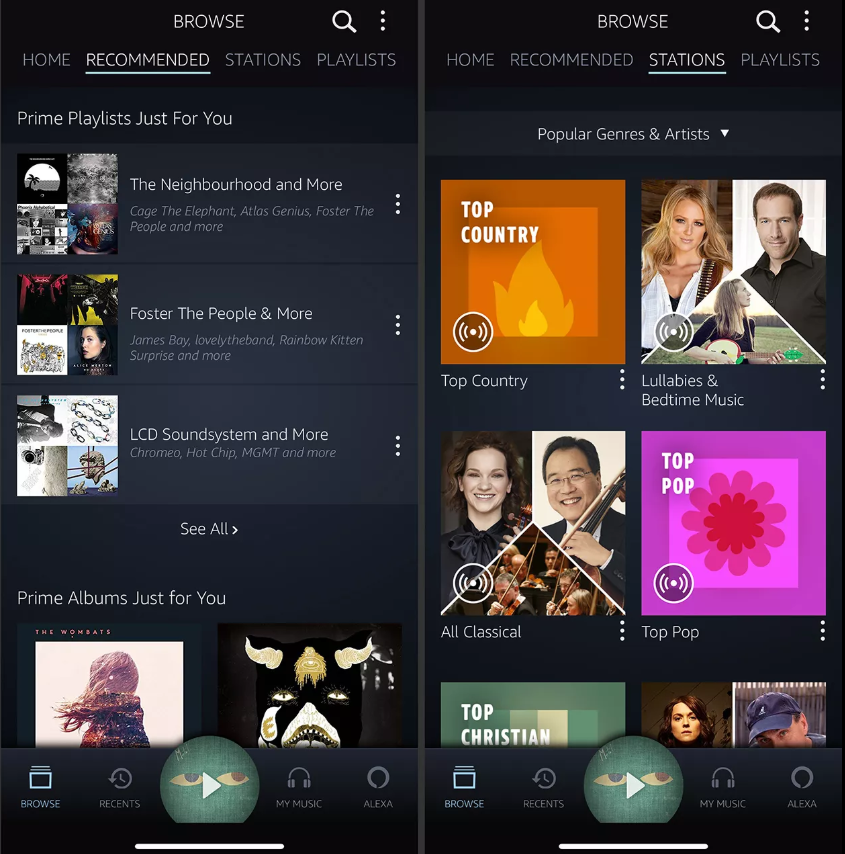 Another of Google’s prodigy, YouTube Music has come a long way. Even though the search giant hasn’t revealed the total number of songs in its repository, it wouldn’t matter to folks who just want to hum some tunes along the way. Most people disregard YouTube’s music services, thinking of it as just a video site. Most of my friends prefer YouTube Music due to its sheer simplicity. While it’s a God’s gift for those with an active internet connection, the route to offline luxury isn’t bad either. Your musical journey will be blissful considering the music videos and full albums found on it. It creates playlists based on your listening habits. Download YouTube Music from the link below. 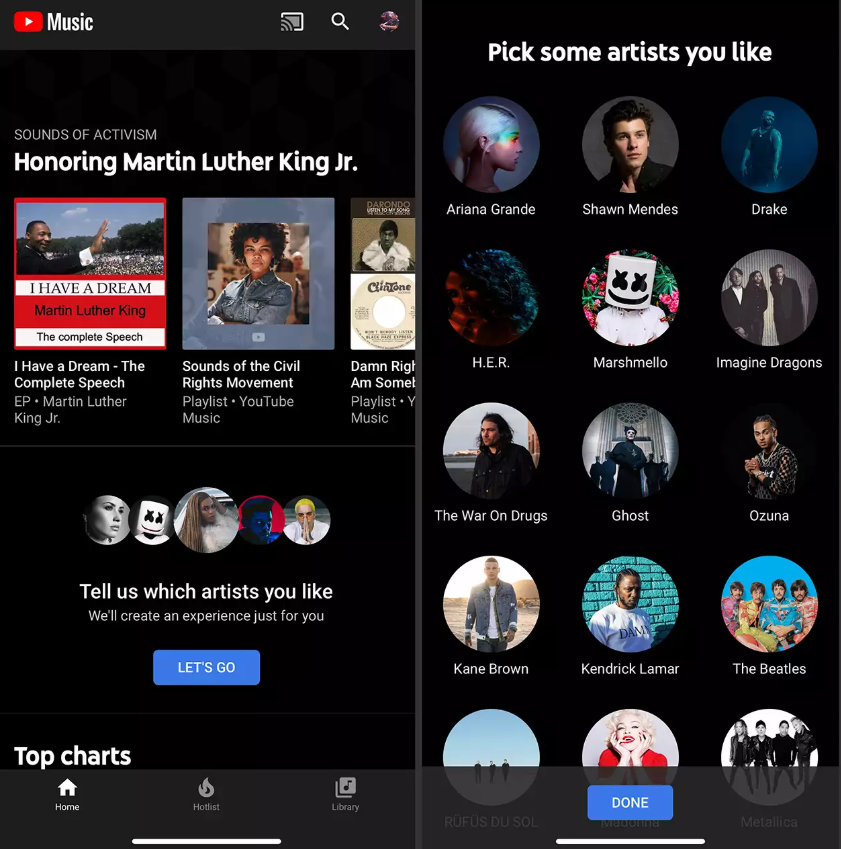 SoundCloud is our next pick for the free music apps for iPhone. It is a well-known streaming platform that is an underdog’s holy-grail. It’s not as hyped as Spotify or Apple Music. Instead, it is a hub for musicians, DJs, and other creative people who want to let the world know about their creations. That’s why it features over 150 million tracks. You might run out of time but not music! Download SoundCloud and let your ears explore a globe full of cultural music. 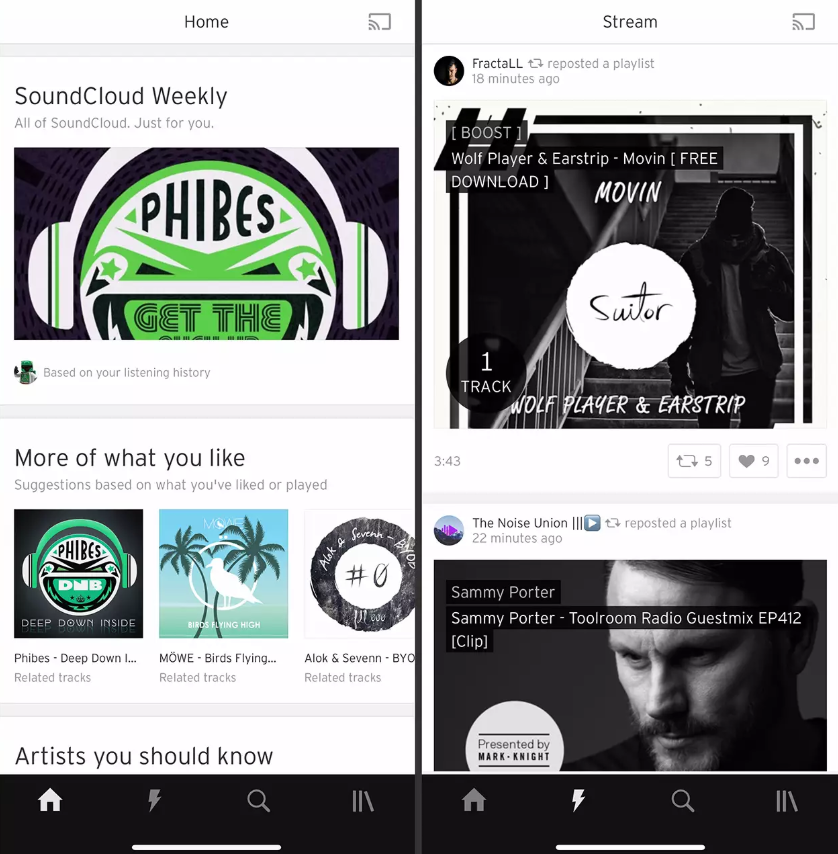 In my view, Gaana still has to come a long way to compete with the likes of JioSaavn, Spotify, or Apple Music. Although it has a repertoire of just 30 million songs, it gest you to groove to the latest tracks in no time. Folks who are looking for local content, this should be your second choice, after JioSaavn. While the app is quite confusing, it does curate songs that match your demands. From Punjabi to English songs, it manages to indulge in (almost) every kind of music. There’s also a handy little lyrics tab that will let you jam along. Download Gaana from the link below. 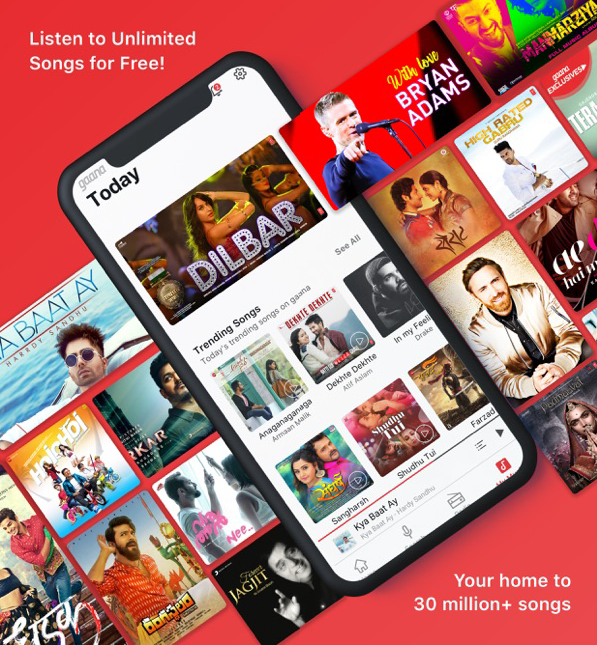 The penultimate app on our list of the free music apps for iPhone is Spinrilla. It is a fulcrum of hip-hop mixtapes that might not match the money-making streaming services, but it does release albums before they are officially out. You can easily access many such mixtapes, which will save you people visits to the local record shops. Users get access to new releases, trending songs along with commenting and sharing the song you are listening to.
Streaming the official major-label releases from record companies on services like Apple Music or Spotify is great, but it’s far from the only place where new music debuts. In fact, if you’re really into hip-hop, you know that there are tons of great mixtapes coming out of the underground and hitting the streets long before official albums are released. Download Spinrilla from the link below and let your head spin. 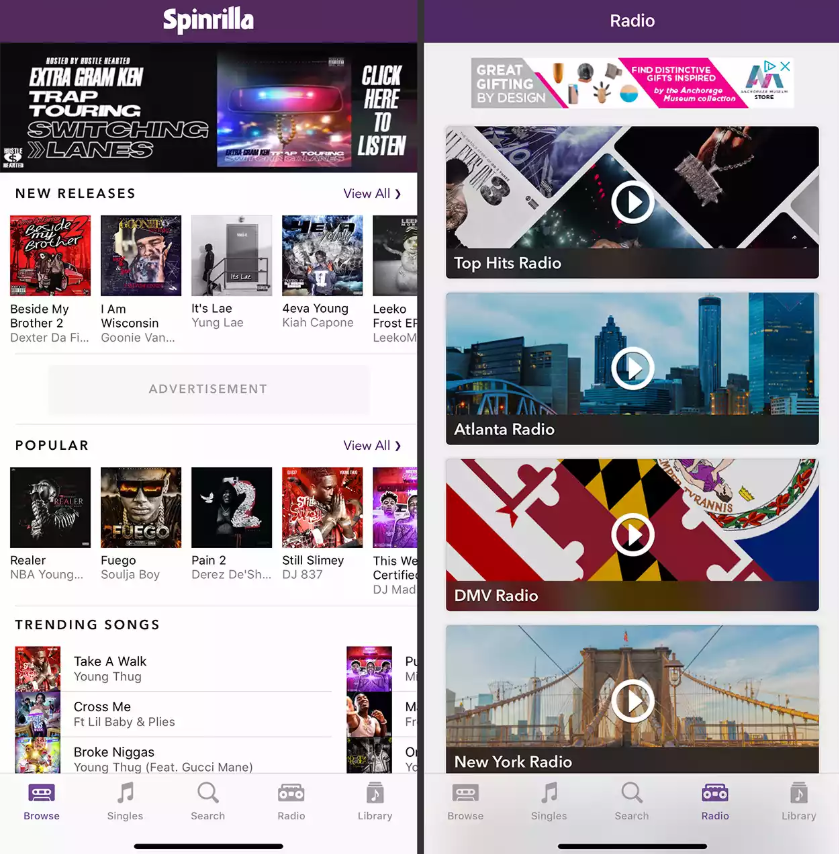 The last app on our list of the free music apps for iPhone is TuneIn, which is generally referred to as a radio-bliss. You’d be surprised to know that it does more than that. Of course, the list of free radio is just too much as it streams close to 100,000 radio stations that lets you explore the music, talks, sports, and news. Users can access a humongous list of podcasts that will keep you busy in your quarantine. Turn on your location to access more location-based content. The user interface is easy and intuitive. Download TuneIn from the link below. 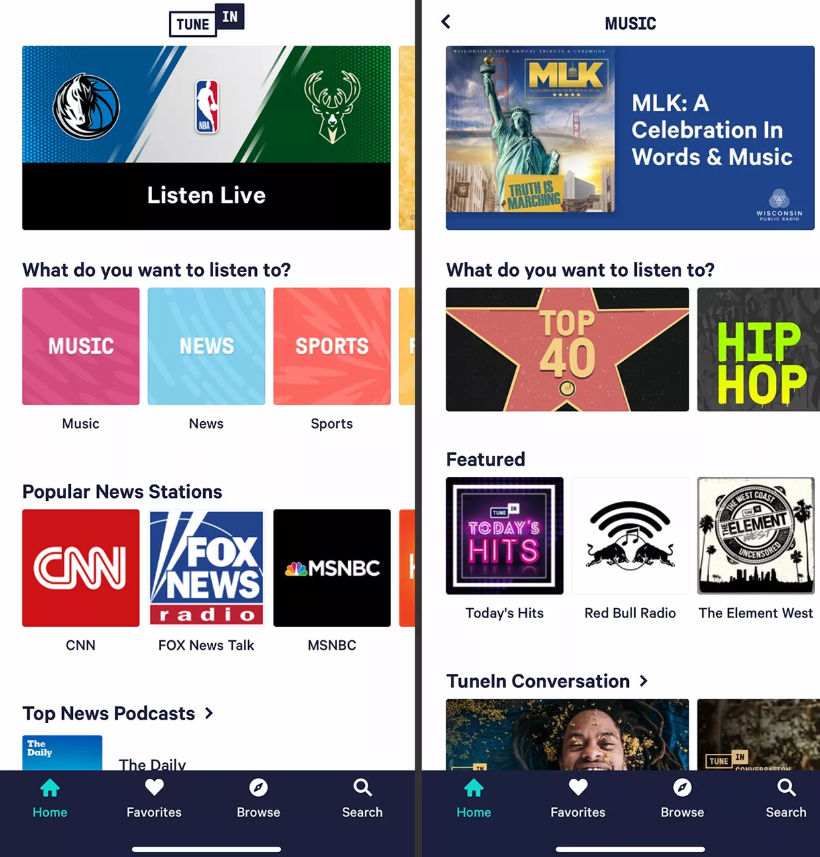 Top 10 Best Apps like Omegle For Android And iPhone