Mar 24, 2020
Android is considered to be the most versatile mobile operating system. It has a wide range of functionalities coupled with the millions of apps that can be installed from the Google Play Store. With Android 10, Google has managed to cover most of the basic features like dark mode or privacy settings. But, what’s been missing for a long time is a simple feature called screen recording. Thus, we bring you some of the best screen recorders for Android.

The first app on our list of the best screen recorders for Android is the AZ Screen Recorder. It is the paradigm of screen recorders. The app, that weighs just 18MB, packs tonnes of features. The UI is light, easy, and gets things done without any hassle. There’s an overlay button to record content but don’t worry, it won’t mess up your interaction with other apps. Gamers can use the front camera while streaming the game or for hilarious commentary.
AZ Screen Recorder also has a small built-in video recorder so that editing little mistakes won’t need a computer. The app doesn’t have any watermark nor does it require your phone to be rooted. The free version would suffice but those looking for additional functionalities, you can purchase the pro version for mere $3 (₹226). It isn’t much considering the app literally offers A to Z features. Download this app from the link below.

Created by InShot, known for its powerful video editor, Screen Recorder & Video Recorder is another fantastic app that lets you easily record your screen. The apps let you obtain smooth & clear screen videos with just a tap on the floating window. You can record HD video tutorials, video calls, live game stream or some videos that you aren’t allowed to download.
Screen Recorder & Video Recorder supports the highest quality, video formats: 1080p resolution and 60FPS. The app also has an in-built video editor that will let you trim the video and change the speed. The best feature of this app is that it has no recording limit. Don’t worry, you don’t need a rooted phone to make use of this feature. Download this app from the link below. 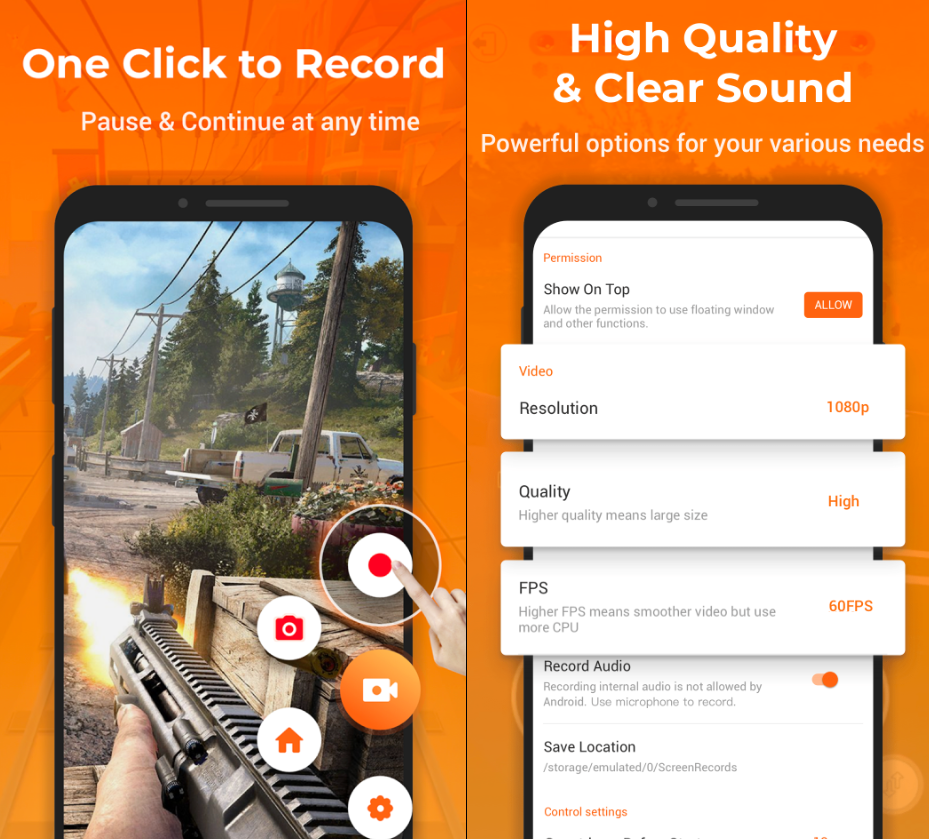 ADV Screen Recorder by ByteRev is a reliable screen recorder which so many features that you’ll probably never use them. It’s good to have them though. The app lets you record your phone’s screen with two different engines, which could be quite handy. Geeky users will feel at home as you can easily change different resolutions, frame rates, bit rates, and also draw and write over the clip. The handiest feature is the countdown which lets you prepare 3 seconds before the recording begins! Neat! Download this app from the link below.

Screen Recorder – Record with Facecam And Audio is an underrated screen recorder. The app, which is used by over 4 million people, is a simple yet effective screen recorder. It’s fast, easy, and packs a lot of punch. You can even use your camera and microphone to cast right from your phone. This app, too, boasts of an unlimited recording length that produces high-quality video. Download Screen Recorder from the link below. 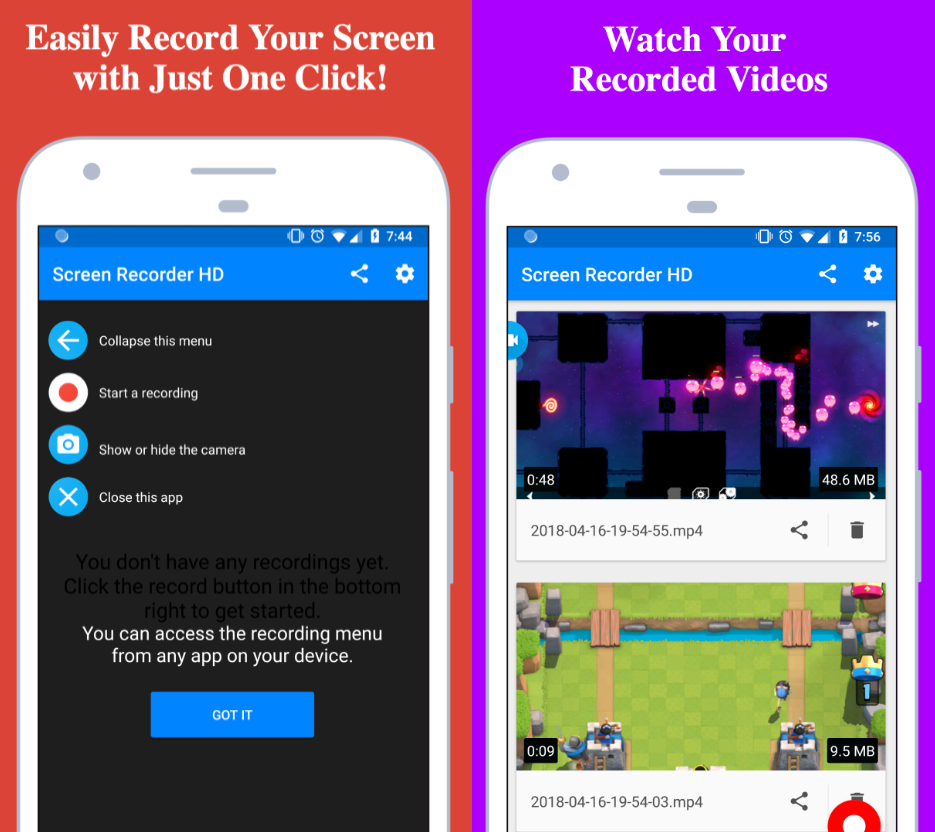 The next app on our list of the best screen recorders for Android is Super Screen Recorder. It is an excellent screen recorder which has a great user-interface. It’s not your ordinary screen recorder but it also doubles as a video editor. Like a few apps in this list, Super Screen Recorder lets you record your screen without a time limit that doesn’t require root access. Along with a light and easy UI, the app provides high-quality videos.
You can choose the resolution, frame rates, and bit rates. The app lets you pause and resume swiftly. The floating windows do not cause trouble while executing any actions. The app includes a GIF maker, a Facecam, and a brush tool that lets you draw over the video. I rest my case! Download this app from the link below.

Yes, I have included the Google Play Games because it isn’t just a hub for your gaming needs. It includes a decent screen recording feature that will suffice most of the novices. But take note – it’s mostly for games. You can launch a game and screen recorder simultaneously. In order to recorder anything other than a game, you’ll have to exit the on-going game mid recording and then going to whatever app you want. This is a tedious method so I’ll advise only gamers to use it. All the other screen recorders are quite versatile.

Mobizen Screen Recorder by Mobizen is a user-oriented screen recorder that is extremely easy to use. Capture, record, and edit videos easily with Mobizen’s fantastic features. Users get to opt for high-quality video resolutions. Furthermore, the app has a myriad of video editing features. Also, your phone doesn’t need to be rooted to use this app. You can remove watermark for free with Clean Recording Mode. Mobizen is a free app that is ad-supported but there are quite a few in-app purchases to bring more features. Download this app from the link below.

The next app on our list of the best screen recorders for Android is Screen Recorder by AppSmartz. The app is versatile that has a lot of features baked in to provide a unique user experience. You can capture the contents of your screen along with your own video with the help of your front camera. This feature can be used by people who record videos to explain the usage of a variety of things.
As is expected from a screen recorder, the app lets you record HQ videos along with various resolution, frame rates, and bit rates. The built-in video editor lets you draw text on the screen while recording and trim videos. Download Screen Recorder from the link below.

GU Screen Recorder is the penultimate app on our list of the best screen recorders for Android. This decent screen recorder lets you record your screen’s content easily with an unbeatable user-interface. You can doodle on the video which comes in handy if you want to highlight a part that people should take notice of. Other perks are high-quality video, full-screen recording, and easy export. Download GU Screen Recorder from the link below.

The last app on our list of the best screen recorders for Android is GU Screen Recorder. It has a rating of 4.6 on the Google Play Store and for good reasons. It’s powerful recording features lets you choose the aspect ratio ( widescreen, vertical or square) that starts recording with just a touch. It has a simple user-interface and recording the screen has never been so simple on any app.
Screen Recorder V Recorder is the only app on this list that lets you choose 1440 resolution. You can also change some settings to make the audio sound more distinguished. The video editor included in this app is no slouch either. It provides you with trendy filter to make your video look more professional. Along with stickers and GIFs, the app offers access to over thousands of fully licensed music! What more do you need? Download this app from the link below.

Top 10 Best Apps like Omegle For Android And iPhone